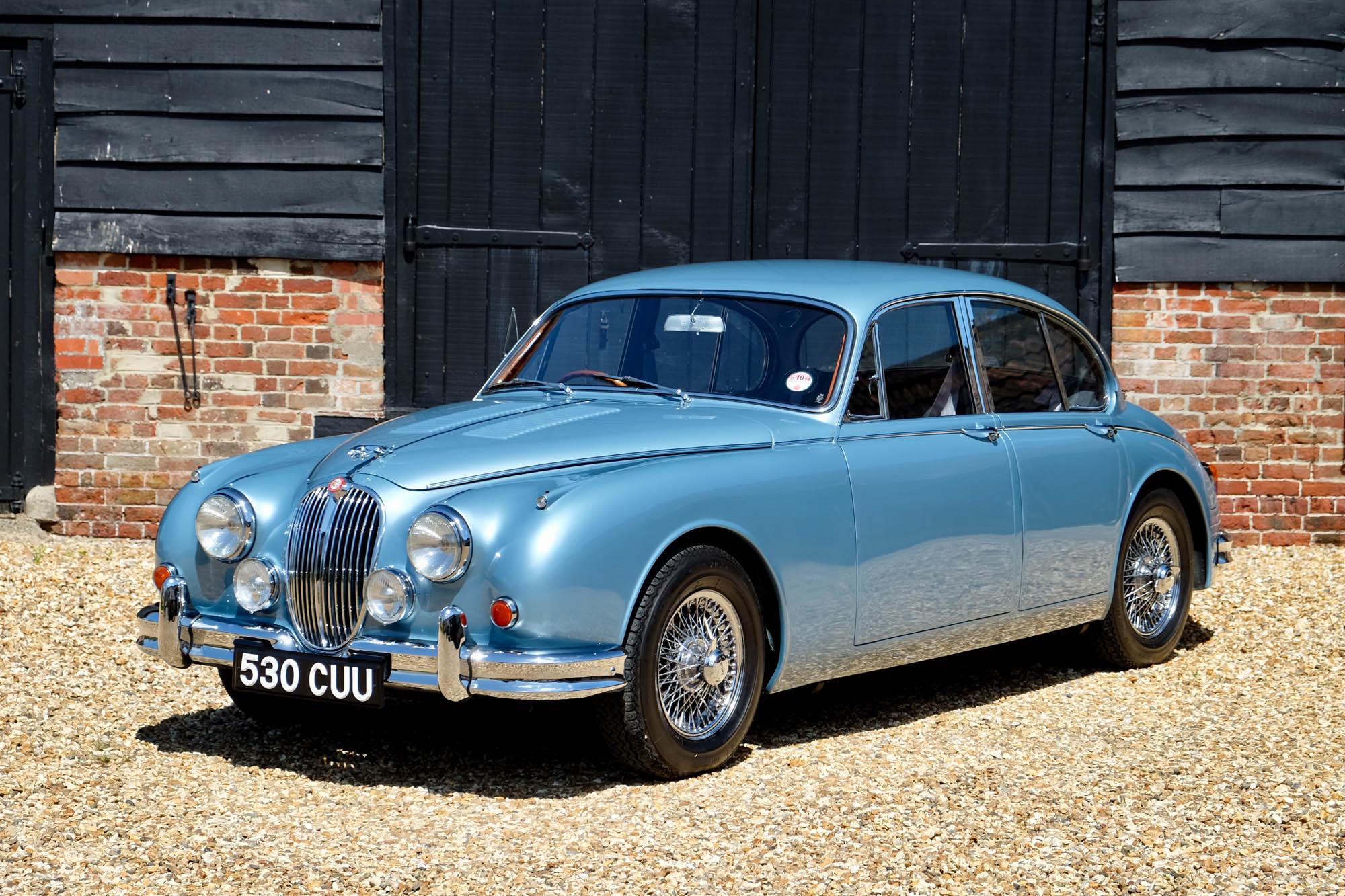 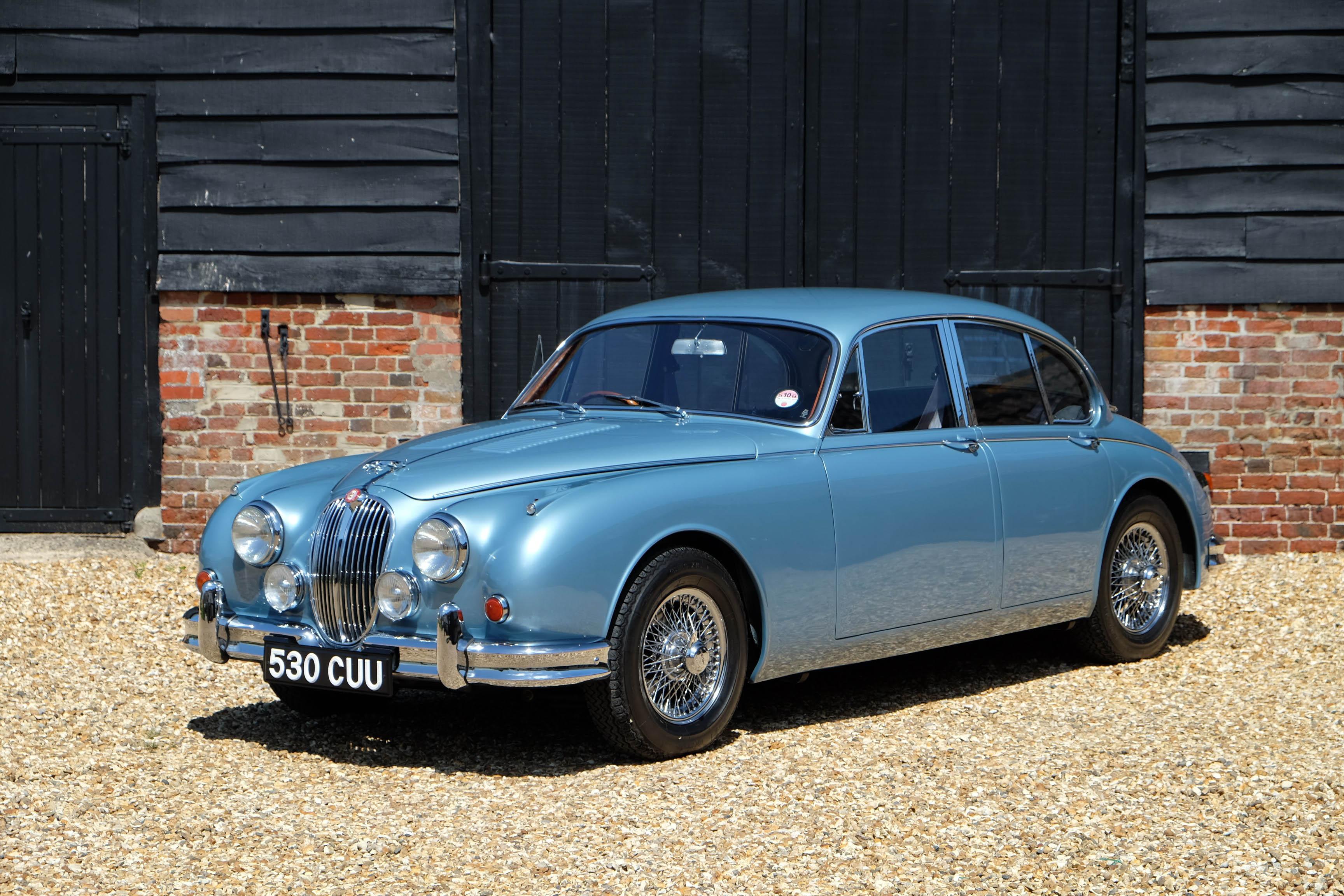 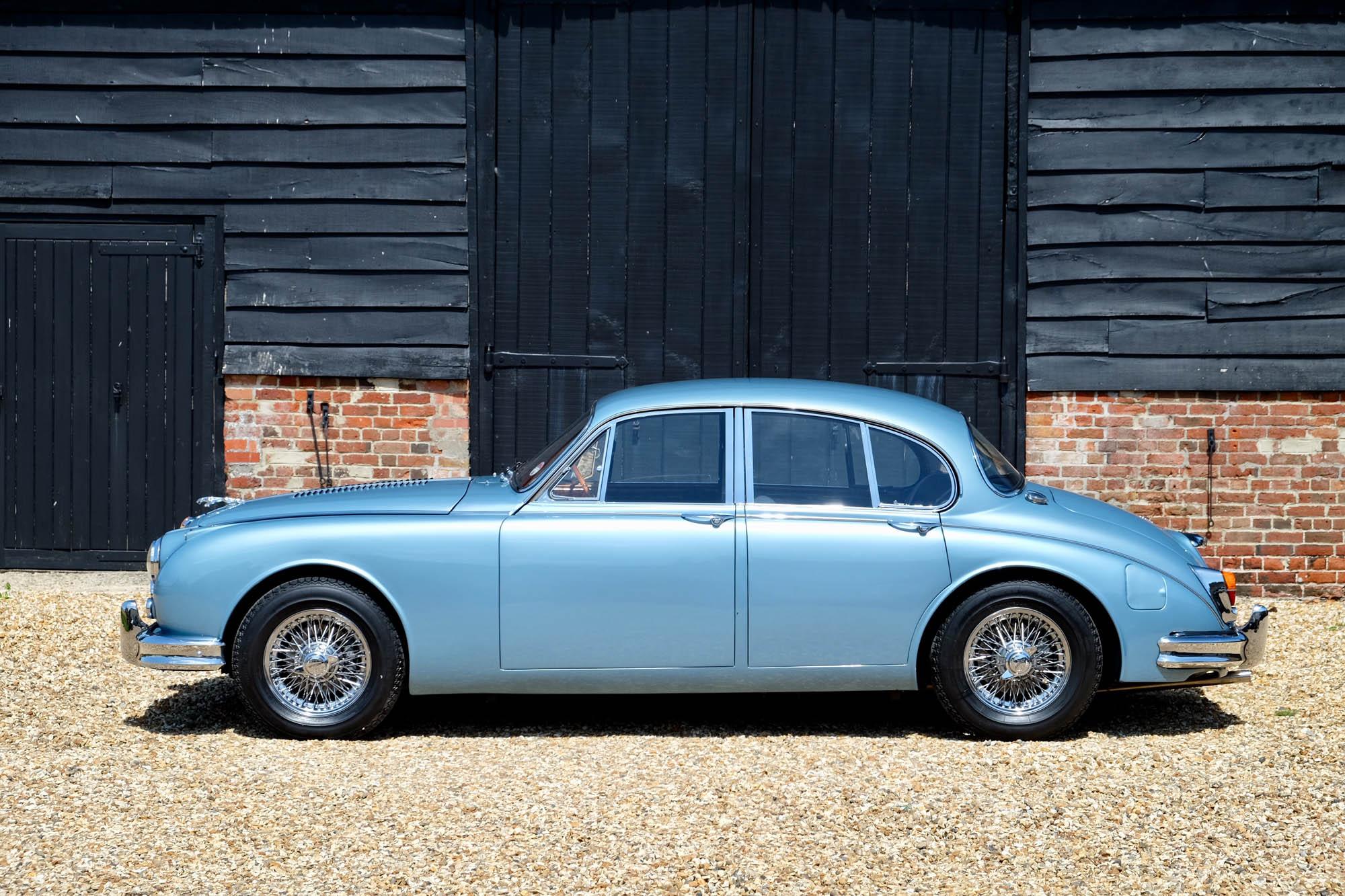 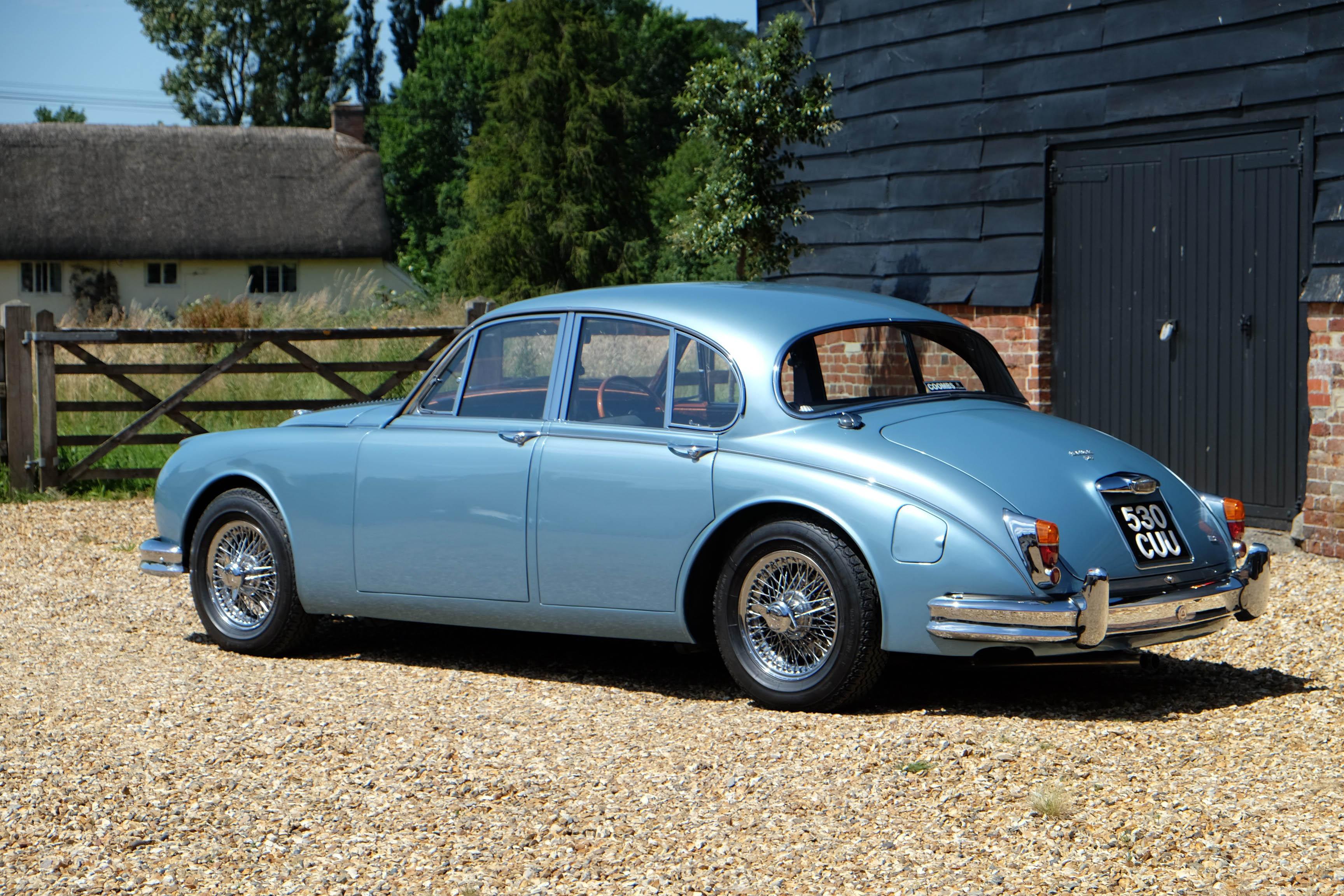 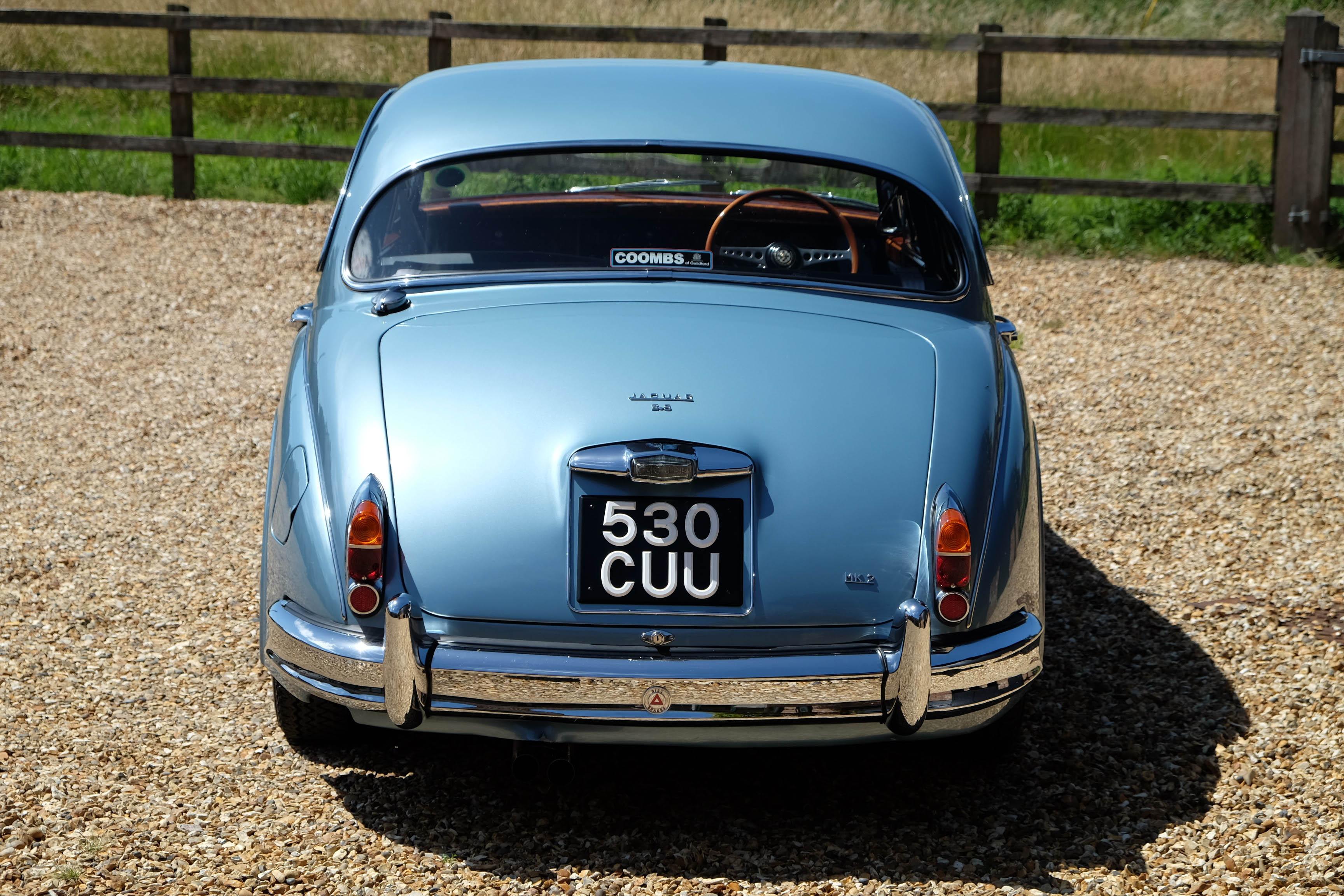 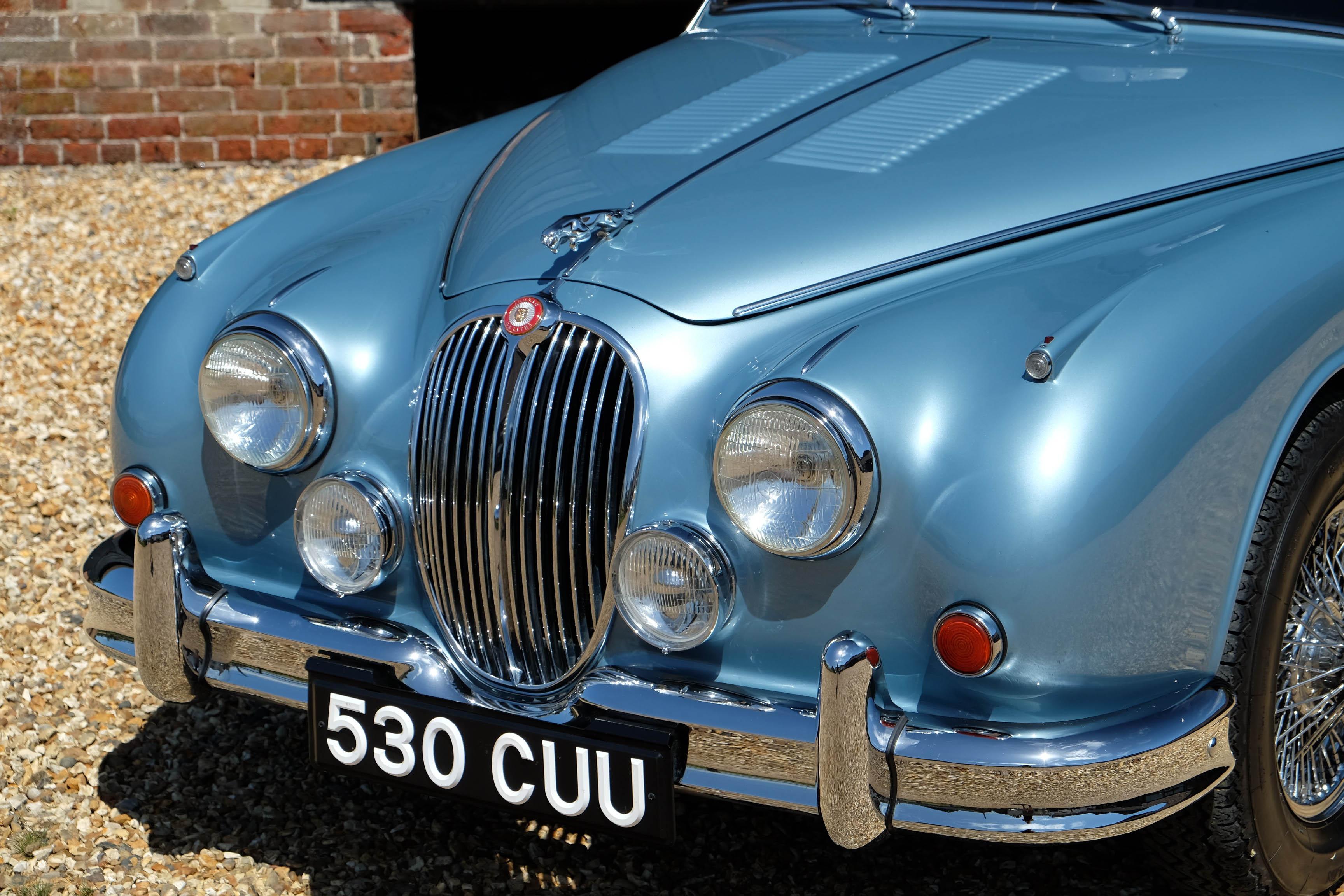 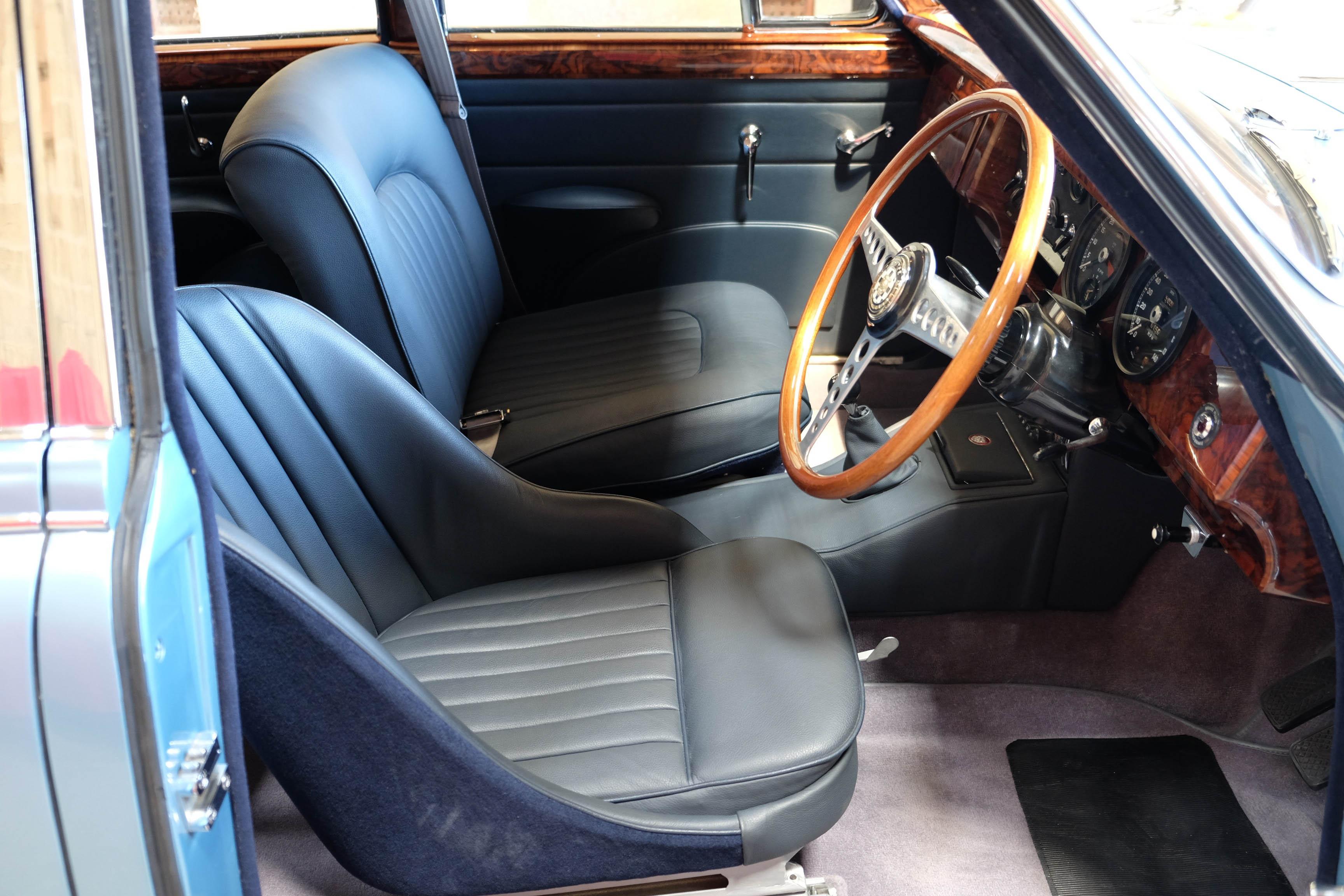 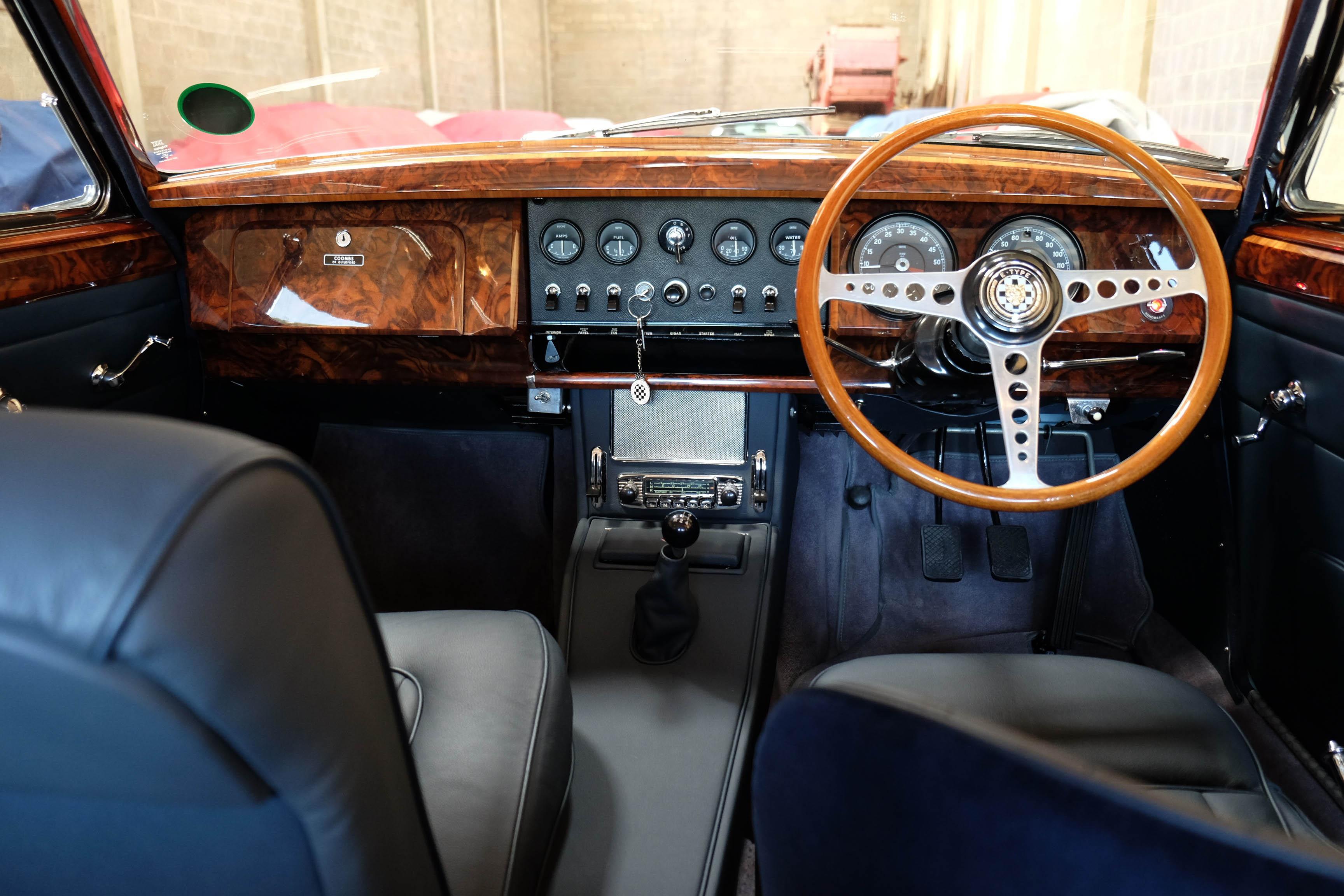 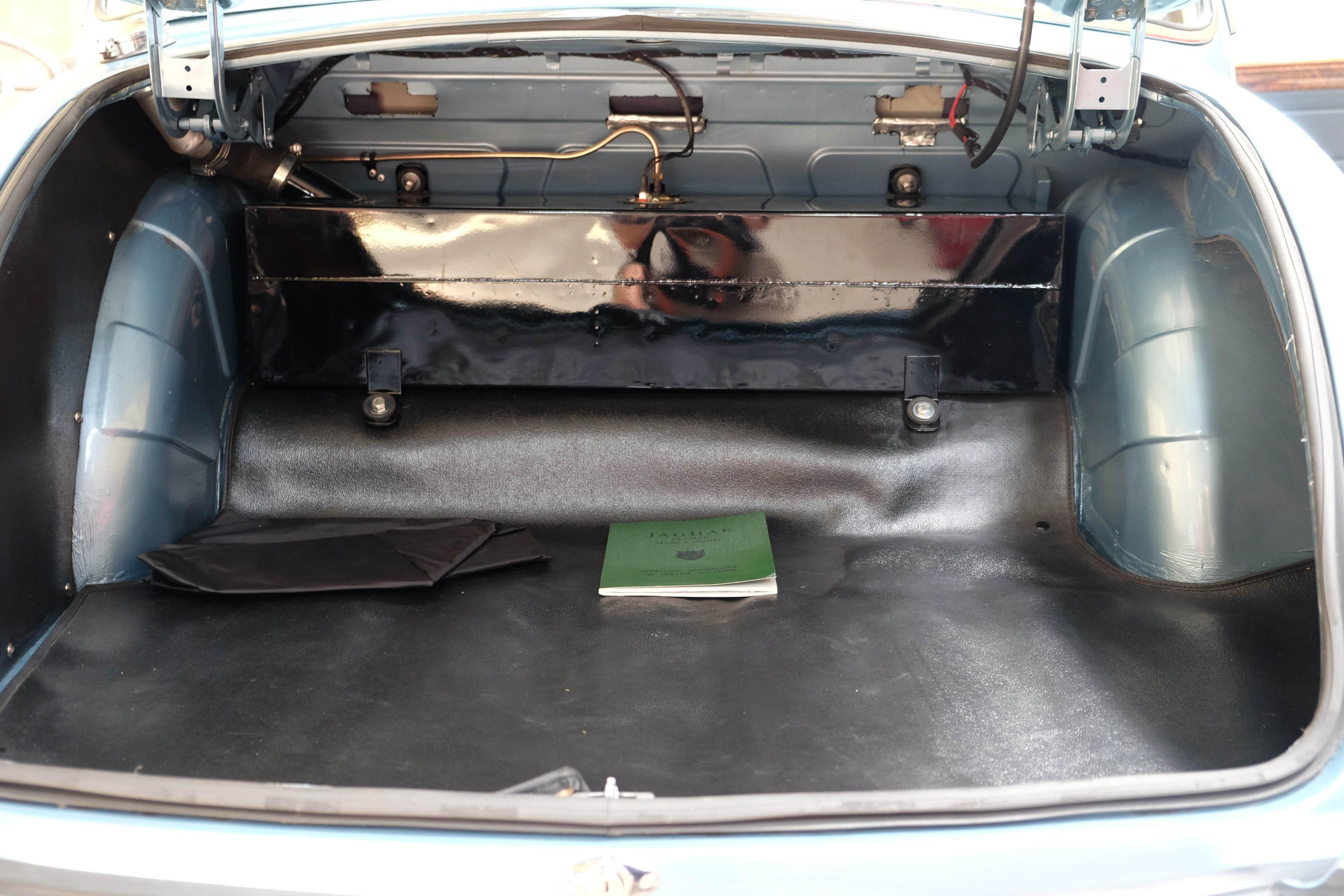 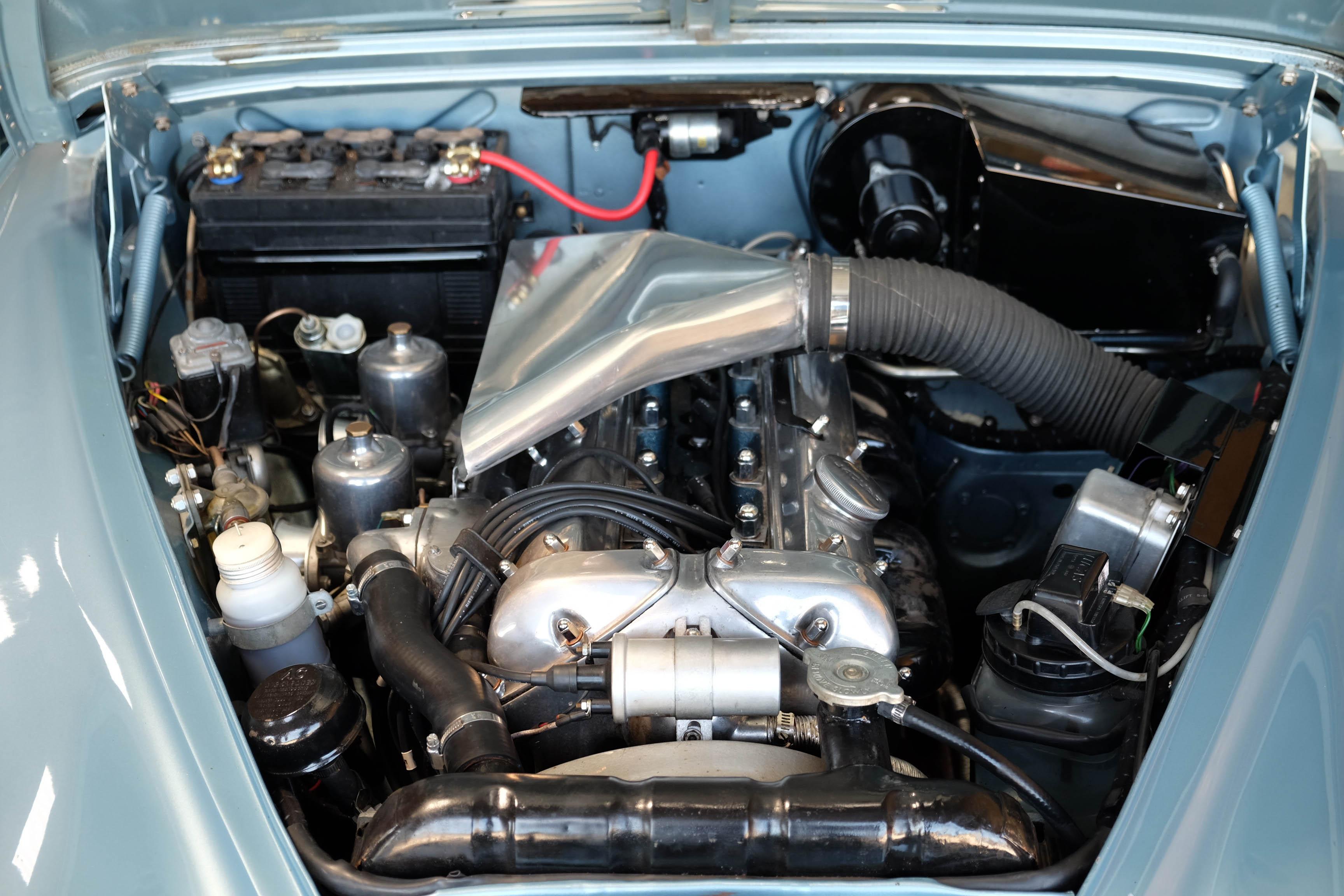 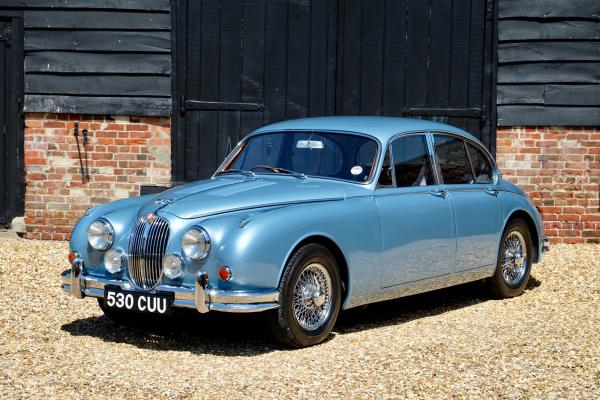 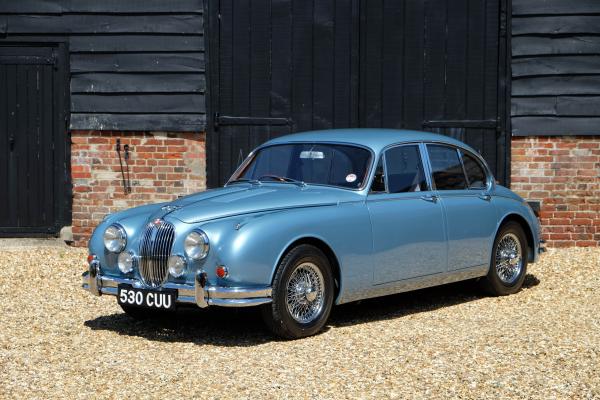 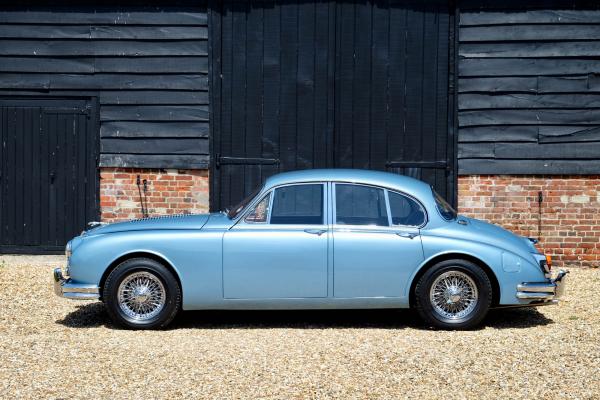 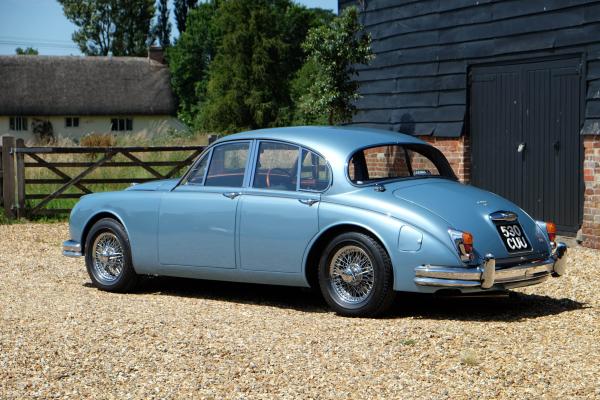 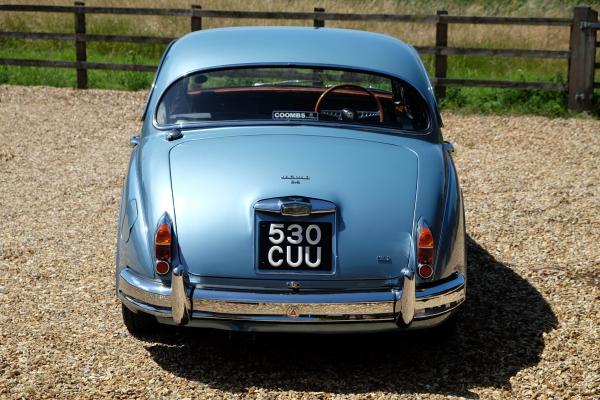 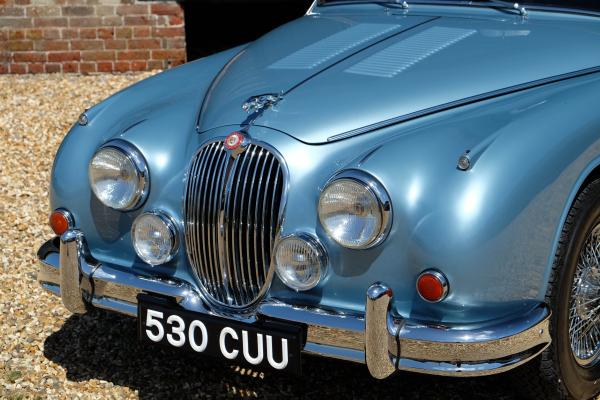 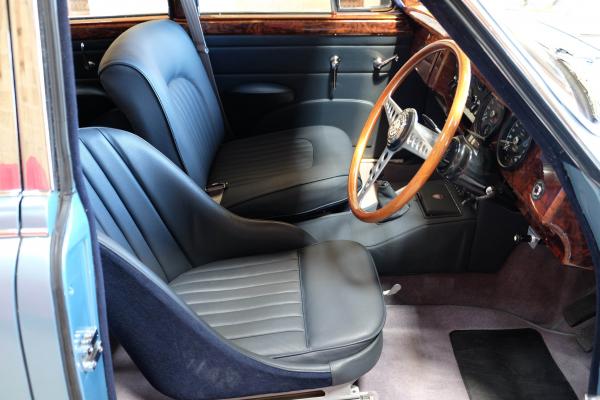 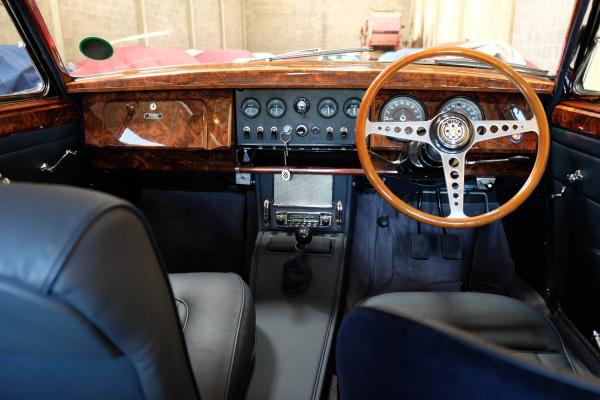 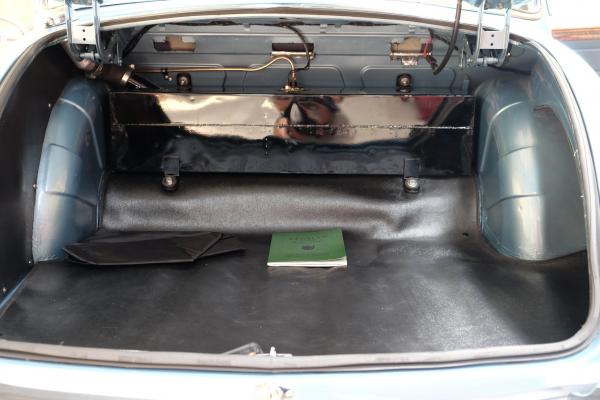 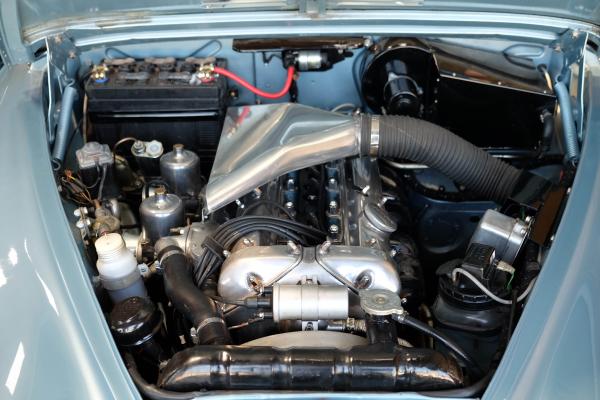 Coombs and Son were appointed Jaguar dealers shortly after the end of the Second World War. John Coombs, the proprietor was a keen fifties club racer, indeed he entered a Jaguar MK1 into the Silverstone TT of 1956, the year Jaguar officially retired from racing. John Coombs also retired from racing at this point to become a private team owner and manager instead. The success of this team is now the stuff of motor racing legend. Their superbly modified Jaguars were the front running cars for many years in the hands of great drivers including Roy Salvadori and Graham Hill.

As a result of customer demand Coombs introduced a number of performance modification options borne of their racing experience with the Jaguar road cars they supplied. The upgrades were mainly focused on the MK2 3.8 which was the sporting saloon to own in the Sixties with performance, handling and braking far ahead of the opposition, even in standard guise. The Coombs basic conversion involved rebuilding the engine with 9:1 compression, balanced crankshaft, lightened flywheel and gas flowed head. A high ratio steering box could be supplied as could a free flowing exhaust, carburettor air intake with polished air spreader and adjustable shock absorbers. Further specialist items included modified rear arches deleting the wheel spats, long range fuel tank, E Type wooden rim steering wheel and Restall bucket seats.

The Coombs modified MK2 was very highly rated by drivers and motoring journalists of the time. An already impressive standard car was elevated to greatness, the improvements to performance and handling made this a very quick point to point car, indeed, it was a match for the E Type to 100mph.

It is thought that less than thirty MK 3.8 examples were modified and sold when new by Coombs. Consequently an original example has become a rare and desirable find. This is just such a car, 530 CUU is a genuine Coombs modified from new MK2 3.8 sold by Coombs to its first owner in June 1961.

The car is in superb condition having been fully restored under the watchful eye of Ken Bell. Mr Bell was an employee at Coombs for many years and is now considered to be an authority on the Coombs Jaguars. Needless to say he has authenticated this car. Finished in its original colours of Light Opalescent Blue with grey leather, the car features its original engine with Coombs conversion, air spreader, E Type steering wheel, open rear arches, manual choke switch, chrome wire wheels, long range fuel tank and Restall drivers bucket seat.

The car was ordered from Coombs when new by a Mr James Penny of Wimbledon. A vehicle information sheet from Jaguar confirms the delivery to Coombs, a copy of the original buff registration book shows the car being first registered with registration number 530 CUU which it retains today and delivered to Mr Penny on the 27th June 1961. A letter on file from Mr MacDowell, the managing director of Coombs of Guildford, dated May 1997, confirms that a former salesman at Coombs, a Mr Ron Sambourne, recalls Mr Penny as a customer. Mr Penny retained the Jaguar for many years taking it with him to Hove in Sussex when he retired. A letter on file from Mr Penny dated the 21st April 1980 confirms that he was the sole owner since purchase from Coombs. He also confirms the engine modifications he ordered.

The late Graig Hinton, a well-known Jaguar racer and owner of Leaping Cats, purchased the car from Mr Penny. A letter on file to a later owner states that CUU was a great car in very original order that stands out as amongst the best of many MK2s he had owned. Indeed, he remembers his son getting a speeding ticket driving it back from Mr Penny in Brighton. He had a number of memorable trips in the car including a trip from Edinburgh to Hinckley at which he sat at 110 to 120mph for mile after mile.

In 1982 530 CUU was purchased by Mr John Last, a resident of Shropshire. The car remained in original unrestored condition and Mr Last rarely used the car, however he looked after it carefully and stored it well. Mr Last exchanged correspondence with a number of Jaguar enthusiasts with letters on file to and from Paul Skilleter and Ken Bell.

In 2003 Mr Ken Bell was approached by car enthusiast Michael Culhane, who bought his first Jaguar MK2 when just 18. He wanted a genuine Coombs MK2 3.8 and realised that Mr Bell was the best person to find him one. At this point Mr Bell contacted Mr Last to see if he might sell his car. At the right price he said he would and so following verification of the car by Ken Bell, a deal was struck.

530 CUU was in very original order but clearly in need of some renovation work. Mr Culhane intended to restore the car using his own highly regarded company, Pitt Lane, a Jaguar specialist. However, Mr Culhane really wanted to go historic racing and an original historic Sixties Jaguar racer became available and was purchased by him. As a result the last owner, a very good customer of Hairpin and a particularly fastidious enthusiast purchased the Coombs Jaguar.

He commissioned a full rebuild by Pitt Lane under the watchful eye of Ken Bell who regularly inspected the car during its rebuild to ensure every detail was correct to the original. The car was completely stripped to the bare tub and then painstakingly rebuilt to original specification. The engine was completely stripped and rebuilt by Ken Bell himself and the original Coombs specification exhaust system was remade by him. During the rebuild an all synchromesh gearbox was fitted, this would have been available for the 1964 model year and so could be considered a period modification and it certainly enhances the driving experience. The car retains the very rare and valuable original Blaupunkt radio.

The car was completed in 2012 and handed over to its new owner at the Goodwood Race Revival in September of that year. Mr Ken Bell was present at the handover with another Coombs man, Richard Grimmond.

Since completion the car has been gently run in on dry summer roads and returned to Pitt Lane for servicing. It is in the most fantastic condition in every respect looking much as it must have done when new in Coombs and Sons’ Guildford showroom, back in the summer of 1961. On the road the car is very impressive, taut and effortlessly quick and clearly very well sorted with no untoward rattles or looseness detectable. It really does look and feel very special in all respects. The abovementioned history file accompanies the car along with a tailored car cover.